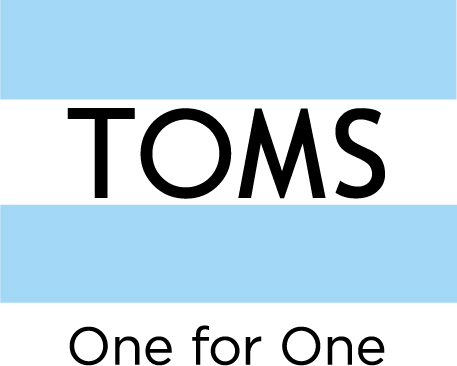 Held Only at TOMS.com, “TOMS Ticket to Give” Provides Lucky Winners the Opportunity to Join TOMS’ Giving Partners to Deliver the One for One™ Experience to Children in Need around the World

March 26, 2012 - In a bold move that brings together the company, its customers and its community in an inspiring new way, TOMS today launched the TOMS Ticket to Give campaign nationwide. Only available at TOMS.com in the U.S., the online contest will find one lucky customer or fan being selected each week to win an once-in-a-lifetime opportunity to participate in a TOMS Giving Trip. TOMS Campus Programs continue to encourage students to play an active role in the One For One™ movement; “TOMS Ticket To Give” is taking this idea a step further. The announcement was made last Monday by Blake Mycoskie, founder and chief shoe giver of TOMS (www.TOMS.com).”I was inspired by the wonderment of Willy Wonka’s Golden Ticket,” said Mycoskie. “The greatest part of my job is going on our Giving Trips. TOMS started this way, and these have been some of the most moving and memorable experiences in my life. We have an unbelievably passionate community, many of whom tell us they would love to go on a TOMS Giving Trip. So we thought, “What can we do to show them how thankful we are for them?”Beginning on March 5, the TOMS Ticket to Give online contest is open to TOMS customers and community ages 13 and up exclusively at TOMS.com. Mycoskie is hoping to notify each of the first several winners in person and will be joining the winners on the first several Giving Trips – helping to inspire the next generation of social entrepreneurs along the way.Previously available just to TOMS employees, the Giving Trips taken through the TOMS Ticket to Give program will enable winners to experience giving One for One™ first-hand. Giving Trips are not vacations, but journeys into communities of incredible people and enormous need. They are hands-on,face-to-face journeys that, for those who are giving, are as much about personal transformation as positively impacting the lives of others.”We want to take as many people as possible on our Giving Trips,” added Mycoskie, “and The TOMS Ticket will give someone a chance to see a holistic approach to our giving. Our hope is that our fans who win a TOMS Ticket and join us will have life-changing experiences, and they’ll come back with a fresh perspective on their communities, their jobs, their lives and the lives of others.”

Giving is at the heart of TOMS’ business, and the company now gives shoes to children in need in over 40 countries, and helps give sight to people in need in nine countries. TOMS partners with humanitarian organizations that have thorough experience in the communities they serve. TOMS helps give sight in three ways by providing prescription glasses, cataract surgeries and medical treatment. The company’s shoe-giving partners work to integrate new TOMS Shoes into their pre-existing health and education programs so that shoes are given to children along with other support like hygiene, education, health care or basic necessities (such as medicines, school uniforms, school supplies, clothing or vitamins). TOMS works to build long-term giving relationships with its giving partners so that the children they serve have access to additional pairs of shoes as they grow. Giving partners report back on the fit, durability and impact of the shoes so that TOMS can continually learn and improve its giving efforts.

About TOMS:
In 2006, American traveler Blake Mycoskie befriended children in a village in Argentina and found they had no shoes to protect their feet. Wanting to help, he created TOMS Shoes, a company that would match every pair of shoes purchased with a pair of new shoes given to a child in need. One for One™. To date, TOMS has given over two million pairs of new shoes to children through giving partners around the world. In June 2011, TOMS launched its second One for One™ product, TOMS Eyewear, to help save and restore sight to people in need.

About TOMS Campus Programs:
TOMS Campus Programs provides resources to host fun and educational activities and events that raise awareness of the TOMS movement on campus. Thousands of students and educators participate in the program annually. Teaching guides and multimedia resources are available for educators that would like to inspire students to think about business and giving in a new way. To get involved or for more information, please visit http://www.TOMSCampusPrograms.com

MORGANTOWN, W.V., March 12, 2012 - SustainU, a leading producer of apparel using fabrics made from 100% recycled materials that are manufactured in the USA, today announced its partnership with the Bonnaroo Music & Arts Festival and the 2012 oneShirt Challenge, the nation’s largest collegiate clothing drive.

“We are very excited to partner with Bonnaroo for the oneShirt Challenge and to help students and their communities become more aware of the benefits of textile recycling,” said Chris Yura, CEO and founder of SustainU. “Bonnaroo is leading the way in sustainable practices for concerts and events and this partnership helps everyone to have a better understanding of the impact clothing can have on our future.”

Building on momentum from last year when nearly 100 schools participated, SustainU expects more than 200 schools in all 50 states to join the inter-school competition during Earth Week 2012. Campus groups will rally their community to donate used clothing to benefit local charities. Schools will weigh donations and schools with the most total and per student amounts will be declared The Big Shirts on Campus.

Bonnaroo has committed to providing the school that collects the most clothing with a Grand Prize of a Reserved Group camping space and 24 four-day passes to the 2012 Bonnaroo Music & Arts Festival in Manchester, TN from June 7-10.

“Many people do not realize that donated textiles not only reduce the waste stream to our landfills, but also often support job training programs,” said Rich Goodstone, Bonnaroo Partner. “Because apparel is such an integral and meaningful part of the festival experience, we want to do all we can to encourage sustainable practices.”

Campus groups, clubs or departments interested in joining the oneShirt can visit SustainUclothing.com/oneShirt or contact Tiffany Newcomb at 304-413-416.

About SustainU (SustainUclothing.com)
SustainU produces high quality apparel using fabrics made from 100% recycled materials that are manufactured in the USA to provide extraordinary comfort and wear, while reducing environmental waste, carbon emissions and water use. Our mission is to change the way clothes are made to improve the environment, reinvigorate America’s manufacturing sector, and educate the world about how clothing can positively impact people’s lives.

About Bonnaroo (Bonnaroo.com)
Set on 700 acres in Manchester, TN, Bonnaroo is a four-day festival that draws 80,000 fans every summer. Featuring over 120 musical performances, along with comedy, cinema, sustainability workshops and more, the grounds are converted into a virtual city of music and art. The legendary event began in 2002 as a remarkable idea to serve a passionate fanbase, and ended up becoming the premier multi-day concert destination of the summer which dynamic and eclectic programming paved the way for the age of the great American music festival. Bonnaroo has now evolved into becoming much more than just a concert destination; it has become a cultural touchstone and, for two generations of music fans, a rite of passage. Bonnaroo has served as a launching pad for such popular artists as Kings of Leon, The Black Keys, Norah Jones, Jack Johnson, Robert Randolph, My Morning Jacket, Ray Lamontagne, Matisyahu, and many others. A creative and cultural mega-success, Bonnaroo has featured a stagger ingly diverse range of world-class acts such as Bob Dylan, Metallica, Bruce Springsteen and the E Street Band, Stevie Wonder, Neil Young, Radiohead, Jay-Z, Phish, Eminem, Willie Nelson, The Police, Pearl Jam, David Byrne, Tom Petty, The Black Keys, Tool, Wilco, The Dave Matthews Band, James Brown, The White Stripes, Al Green, Arcade Fire, Nine Inch Nails, The Dead, Mumford & Sons, Widespread Panic, Death Cab For Cutie, Elvis Costello, Ornette Coleman, Amadou and Mariam, Beck, TV on the Radio, Against Me!, Merle Haggard, Florence & The Machine, Phoenix, Alison Krauss, Robert Plant, Bright Eyes, Bonnie Raitt, Lil’ Wayne, Steve Earle, Jurassic 5, Modest Mouse, The Mars Volta, Deerhunter, Common, Burning Spear, the Flaming Lips, among many others.

“McNeil is committed to supporting the future of healthcare.  Our TYLENOL® Future Care Scholarship program has awarded $8.7 million in scholarship funds to more than 6,700 people,” said Denice Torres, President, McNeil Consumer Healthcare.  “We are proud to support these exceptional students as they pursue careers dedicated to caring for others.”

TYLENOL® Future Care Scholars will be selected based on leadership qualities, academic performance and community involvement.  To be eligible, students must complete at least one year of undergraduate or graduate study by the Spring of 2012 at an accredited two or four year college, university or vocational/technical school.

The application period is now open and submissions must be received by May 31, 2012. Scholarship award decisions will be made in July and awards distributed by August 31st.

To learn more or apply please visit: www.Tylenol.com/Scholarship2012 or text SCHOLAR to 87715