December 14, 2015 — Communications specialist Carolyn Nachman has joined GenFKD, a non-partisan organization dedicated to promoting millennial financial literacy, as Community Manager. In the role, Nachman will be tasked with expanding the organization’s digital presence, with a focus on amplifying the GenFKD’s expansive grassroots network through social media.

“We’re thrilled to welcome Carolyn to our growing team at GenFKD,” said Justin Dent, GenFKD co-founder and Policy Director. “Carolyn’s addition will be a major catalyst as we continue to expand our digital footprint and increase our social engagement to support the efforts of our student fellows raising awareness across nearly 30 campuses.”

Nachman, a graduate of Ohio University and native of Miller Place, New York, will manage GenFKD’s digital outreach program, with a focus on core social media channels including Facebook and Twitter. She will lead the development of integrated strategies to drive conversations and enhance shareable content.

“The economic issues that GenFKD focuses on are relevant to all millennials and it’s crucial that we succeed in promoting financial literacy among our peers,” Nachman said. “Working with fellow millennials to educate and inform current and recent college graduates, is an amazing opportunity. Social media is my passion and I’m excited to combine it with my background in political science in this role.”

She will report to GenFKD Outreach Director Michael Gorman, who leads the organization’s Fellows Program. Nachman graduated from Ohio University in May of 2015 with a Bachelor of Science degree in Strategic Communications and a certificate in political communications. Before joining GenFKD, Nachman worked in information technology at Diversified Micro Systems. Her previous experience includes internships at Rural Action, a non-profit devoted to environmental sustainability, and entertainment media outlet, Celebrity Cafe.

About GenFKD
GenFKD is a nonpartisan peer-to-peer organization that utilizes editorial content and grassroots organizing to engage Gen Y on economic and financial issues. The non-profit organization seeks to utilize its expansive social following and 26 college chapters to present critical information relating to jobs and the economy in a way that’s informative and approachable.

Whether you’re participating in a Friendsgiving get together or gathering with family for the winter holiday season, a traditional holiday meal can add up to more than 4,000 calories. Check out top tips from Robyn Flipse, registered dietitian, cultural anthropologist and consultant to The Coca-Cola Company, on how to enjoy all of your favorites while trimming the excess calories. 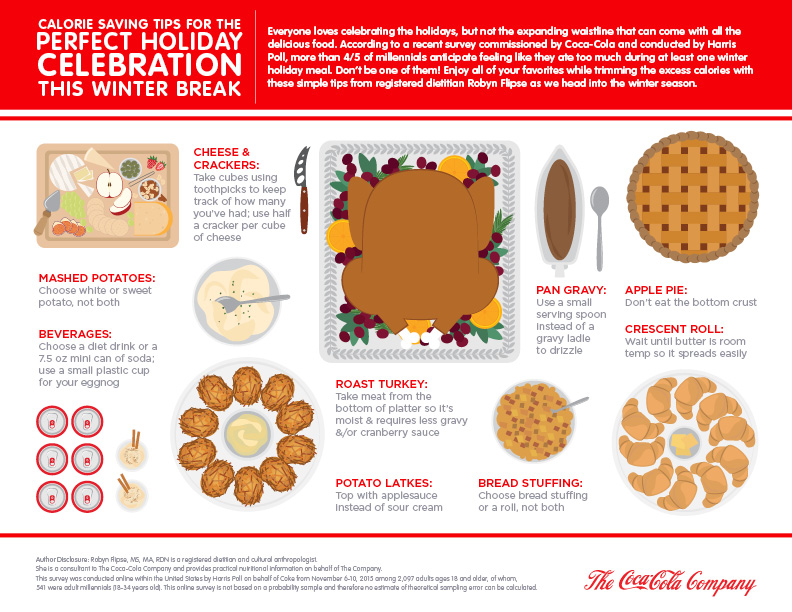 Likely YES they are. Here is the how and the why.

This statistic matches the most recent data showing that 90% of all colleges and universities reported ZERO sexual assaults in 2014 under the terms of the Clery Act.

Unwelcome and unwanted sexual encounters are potential violations of Title IX whether or NOT they get reported. Colleges and universities are required to address ALL such encounters that have the potential to significantly interfere with a student’s access to educational opportunities.

The existing scope of efforts in prevention and dealing with unwanted sexual encounters is quite broad. These include education sessions, awareness communications, and victim counseling. What these efforts omit is two-fold: 1) programs directly aimed at the 85% of victims who are non-reporting and 2) prevention efforts that are both ongoing and a part of the daily life of the typical student. Central to these omissions is the idea that participants in unwanted and unwelcome encounters need to identify themselves as victims. If a participant fails to identify as a victim, then the existing system all too often fails to provide ANY meaningful help.

The 85% are entitled to help. They are entitled to the support which enables them to access educational opportunities without fear or paralyzing confusion. The existing system needs to change.

The 85% are NOT just like the 15% who do report. By definition, the simple fact that almost 9 out of 10 of all who experience unwelcome and unwanted behavior do not report means that there is something DIFFERENT going on with that 85%. It is likely that the key difference comes down to the perception of the label of “victim” and all that is associated with it.

The old societal standard of “no means no” is rooted in the idea that sexual relations are between a powerful male and a powerless female. This power relationship was not between two people of co-equal free will. Instead it was analogous to a chattel relationship – in effect, one of “property.” The right to say “no” was then rooted in society drawing limits regarding what the powerful could do “to” his property. By definition, the assertion of physical coercion is itself an expression of a chattel relation – and it correctly identifies “victims” and “predators” or “perpetrators.” BUT, as EVERY study has shown, most unwanted and unwelcome sexual encounters do NOT involve physical coercion.

When resources and programs are conditioned upon the use of a label like “victim,” that label gains significance. Those who feel a degree of co-responsibility – the silent 85% – are quite often repulsed by the term “victim” – a label that denies them both agency and freedom. To be a victim is to be on the receiving end of an expression of power in what seems to be a chattel relation – one where notions of ownership, privilege, and property take precedence over free will, personal choice, and equality. If one believes that sexual encounters are to be governed by licensure instead of chattel, then one is asserting that BOTH parties need to be actively involved in granting consent and in fulfilling the pre-conditions to the license.

Agency — free will — is a troubling precondition. If one believes that consent can be withdrawn at any time, then one must examine why aggressive/inappropriate and unwelcome behaviors continued after such consent was withdrawn. The granting of consent is the responsibility of both parties so that they need to communicate clearly, render the boundaries of the “license grant” clearly, and enforce violations.

Victimhood denies the possibility of agency and co-responsibility. With victimhood, all of the responsibility is held by the privileged holder of chattel rights. It is the failure to “look out for the welfare of the less privileged” that makes the less privileged a victim. Many in the 85% would argue that the relationship with the other party was not chattel and unilateral but that it was bi-lateral so that it was they who had the sole or at least shared responsibility for safeguarding their own interest. If they were a “victim,” it was as a victim to their own errors, misjudgments, passions, or lack of control – NOT the result of the abuse of privilege by a chattel holder.

These views are NOT now politically correct BUT THEY SHOULD BE. It makes no sense that colleges’ education efforts are focused more on getting men to agree that “rape is bad — so do not rape,” rather than on “if you find yourself in an uncomfortable or threatening position here is how you might disengage” that is directed at BOTH sexes.

In an age that proclaims the equality of the sexes, in teaching about the role of consent in sexual encounters why are college students taught lessons with their roots in chattel instead of licensure? – in the failure of the noblesse oblige of the “perpetrator” instead of the co-responsibility of equal participants? The vast majority of students on any given campus do not see themselves as even having the possibility of being a sexual predator – thus how are they expected to resonate with educational programs whose main lesson is “don’t predate?”

Where are the tools designed to help all students move away from unwelcome and unwanted sexual encounters and joining either the 85% and the 15%? Where are the props which students need to help cue in appropriate behaviors to prevent such encounters? How are the co-responsible supposed to get counselling about being more responsible – when available counselling is more focused on dealing with being a victim and better exploration of victim’s rights? Prevention efforts which fail to deal with co-responsibility are band aids at best and moral failures at worst.

What colleges and universities are NOT doing is taking steps to prompt discussions amongst prospective partners before a sexual encounter. To speak of “yes means yes” WITHOUT an “only” in front is to broadcast a meaningless platitude. To speak of consent presented in the context of chattel instead of licensure is to degrade and disrespect one if not both prospective partners before they even contemplate a relationship. To fail to provide safe zones for discussion where the co-responsible can explore better ways to respond and react – responsibly – throughout an encounter, is to deny students the very education this sordid topic can best provide them.

America’s colleges and universities are failing in their Title IX responses because those responses fail to take into consideration that the overwhelming number of students don’t think of themselves as either predators or as victims.

Full disclosure my institute produces mobile phone apps to address these issues. We began with a focus on co-responsibility and licensure, and our suite of apps is the result.

So yes, I and my organization are biased. But for effective protection against potential Title IX liability it is time for college and universities to admit that the approach of “don’t rape” and “don’t be a victim” is NOT working – despite the increased emphasis on education and the increased awareness of sexual assault. MOST unwanted and unwelcome sexual encounters involve TWO unhappy people not just one. MOST involve a lack of clarity about boundaries and the absence of well-articulated licensure. MOST unwanted and unwelcome sexual encounters do NOT involve physical coercion. MOST do involve alcohol and other “rationality impairing” substances. Title IX efforts need to embrace these realities, not ignore them.

Title IX was supposed to ensure that all students receive opportunities to learn and grow. It is time our institutions of higher education stepped up to their responsibilities and provided such opportunities.

Not all unwanted and unwelcome encounters rise to the label “assault” nor do they involve only predators or victims. These other experiences are the world of the 85%. Let’s serve them too.