The relentless stream of news around Trump’s presidency has people on both sides of the political isle concerned, and itching to take action, from Elizabeth Warren to John McCain. From the widening controversy over Russia, to Trump’s conflicts of interest and his radical efforts to change America’s course on climate change, the President’s actions are leaving an increasingly anxious citizenry in their wake. In a political climate where a blank book attacking Democrats is an instant bestseller, the growing resistance against President Trump needs an actionable way forward, and Allan J. Lichtman’s THE CASE FOR IMPEACHMENT [Dey Street Books/On-sale April 18th, 2017] provides just that.

Lichtman, eminent political historian and Distinguished Professor of History at American University, is widely known as the “prediction professor” for his historically-based approach to election forecasting. He has correctly predicted every presidential election since 1982 including President Trump’s win, against all conventional wisdom, which predicted that Hillary Clinton would be president.

Using presidential impeachments throughout American history as a lens, including Andrew Johnson and Richard Nixon, and a constitutional analysis, Lichtman shows how Trump is uniquely vulnerable to impeachment in 8 key categories. THE CASE FOR IMPEACHMENT zeroes in on President Trump’s top areas of weakness, including:

• Trump’s stance on climate change – in a unique twist on impeachment law outlined in THE CASE FOR IMPEACHMENT, Lichtman outlines how Trump could be impeached under a “crimes against humanity” scenario if he deliberately fails to protect humanity from the dangerous effects of climate change
• Trump’s dealings with Russia
• Trump’s practice of disregarding the law prior to assuming office, and laws he might break during his presidency
• Trump’s established history of lies, and how lying to the public and Congress can lead to impeachment
• Trump’s treatment of women, and the weaknesses it poses to his presidency
• Trump’s abuse of executive authority
• Trump’s conflicts of interest, past and present
• Trump’s potential psychological issues and how they could trigger the Twenty Fifth Amendment to remove him from office

Many historians and legal scholars agree that we are facing uncharted political waters and most citizens—politics aside—want to know where the country is headed. In THE CASE FOR IMPEACHMENT, Professor Lichtman analyses President Trump’s past and proven behavior, alongside the history of politics and impeachment in our country, to explain how Trump’s presidency could end prematurely. 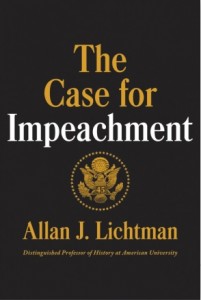