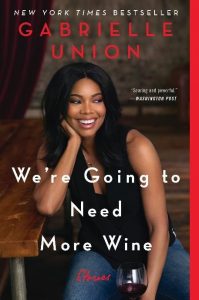 “Union’s collection of wide-ranging, insightful, and funny essays is full of the candid stuff that readers love to find in celebrity memoirs, along with genuine storytelling and bare emotion, which are rarer… Throughout, Union is warm, outspoken, laugh-out-loud funny, and unafraid to reveal painful moments or the versions of herself that had a thing or two to learn. This is sure to be a crowd-pleaser, and deservedly so.”
—Booklist, starred review

“With honesty and humor, Union bares her soul and shares her levels of insecurity, the difficulties of being a black woman in Hollywood, and the way fame has changed her life. She embraces many multilayered issues in these intimate essays, giving readers glimpses of insight into her soul.”
—Kirkus Reviews

“This sparkling book collects amusing and heartbreaking stories from the life of actress Union (Being Mary Jane)… Union’s no-holds-barred essays and intimate voice will appeal to her fans as well as those less familiar with her work.”
—Publishers Weekly

“I have gotten the pleasure to know Gabrielle over the years and besides the fact that she loves to drink, I’ve always taken comfort in how much we have in common. The predilection to go from talking about the latest humiliating sexual position to a debate on politics or racism, that’s exactly what this book felt like to me, an honest conversation with Gabrielle about her life. I appreciate her integrity, love her humor and openness about her life. I also love the fact that she’s older than me . . . Go, girl.”
— Chelsea Handler, #1 New York Times bestselling author of Uganda Be Kidding Me

“I love this woman and her book.”
— Mindy Kaling, #1 New York Times bestselling author of Why Not Me?“

If you ever thought, ‘I could be friends with Gabrielle Union,’ then We’re Going to Need More Wine is the book for you. It’s honest, raw, and funny. Union’s vulnerability about her flaws, mistakes, and also pride in her triumphs will not only make you feel as though you’re seeing yourself reflected, but will also inspire to be your most authentic self. It makes me excited to see where she is going next as a person and as an author.

“A hilarious and moving memoir from a natural storyteller. Gabrielle Union explores love, family, trauma and racial identity in a book that somehow manages to be both heartbreakingly honest and laugh-out-loud funny.”
—Brit Bennett, author of The Mothers

Gabrielle Union is a lot like you and me. While you likely know her from her many film and television roles; her work as an activist on behalf of victims of sexual assault; her smart statements about the place of women, especially black women in the world and in Hollywood; or her status as one of half of the Wade-Union power couple—she’s also navigating today’s world in ways that are all too familiar. She has had to get over her family baggage, go through the wrong men to get to the right one, and push her way past head shakers and naysayers who thought she was less than.

In this engaging, provocative, and funny collection of essays about her life and our modern world. Union gives details of her life that go beyond the headlines and social media to show the smart, tough woman she really is. From her younger years as one of the very few African Americans in her California high school, to the harrowing story of her rape and the aftermath, to her navigation of Hollywood, to the role she plays as stepmother to her husband Dwyane Wade’s sons, to the devastating loss she felt over the friend she loved and couldn’t save, reading WE’RE GOING TO NEED MORE WINE leaves you with that feeling of time with a dear friend. This surprising and special book will nourish your soul and expand your mind.

Union says, “Throughout my life, I’ve often wondered aloud ‘How the hell did I end up HERE?! Why me?’ Not sure I’ve ever found all the answers to those questions, but in this book I share my journey…the good, the bad, and the WTF. You will definitely need more wine for this one.”

With a voice that is loud, personal, brave, and bold, Union demonstrates what it means to wrestle with self-doubt and revel in self-discovery, balancing a glass of wine and a whip-smart sense of humor at the same time.

MORE ABOUT GABRIELLE UNION:
Gabrielle Union is an actress and activist. Currently she stars as the titular character in the critically acclaimed drama Being Mary Jane on BET. She is an outspoken activist for women’s reproductive health and victims of sexual assault. She lives in Miami, Florida.