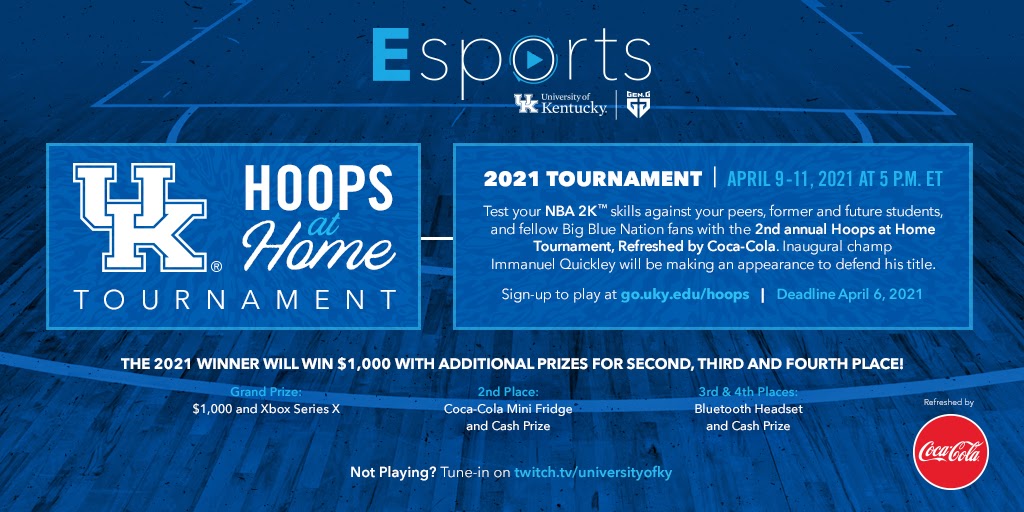 LEXINGTON, KY (March 31, 2021) – Global esports organization Gen.G and the University of Kentucky today announced details for the return of its popular Hoops at Home NBA 2K tournament which will take place April 9-11. The tournament will provide the opportunity for players to participate in a distinctive NBA 2K basketball experience on twitch.tv/universityofky, connecting and unifying the community.

Former UK basketball star and current New York Knicks guard, Immanuel Quickley, will play in the finals to defend his title. The event will be hosted by Jeff Eisenband and Erin Ashley Simon throughout the broadcast.

“I’m really excited to be a part of Big Blue Nation’s Hoops at Home tournament for the second year in a row and defend my title,” said Quickley. “Esports is a great way to bring together our community and have fun connecting with other UK fans around the country. I’m looking forward to seeing who is going to challenge me for the Hoops at Home crown.”

Building on UK’s rich basketball tradition, a bracket of 64 members of the UK community will compete for the championship by going to go.uky.edu/hoops, now accepting submission. This year the winner of Hoops At Home will also win a $1,000 grand prize. Fans must be at least 13 years old and have a PlayStation 4 and the NBA 2K21 game. Fans will find out on April 7 during the Selection Show, if they were selected based on all skill levels and online connectivity that will comprise the four brackets of 16 members.

“This year’s tournament is going to be action packed and will be a great way to keep that Wildcat energy going as we hope this virtual event helps showcase the endless possibilities in and around the UK community as it relates to esports,” said Julien Benichou, Director of Partnership Activations at Gen.G. “Last year’s tournament brought so much spectacle and engagement and as the esports space continues to grow, we look forward to not only this year’s tournament but the natural evolution of our continued partnership with UK and bringing world-class ideas and activations to campus and the community.”

“We remain committed to the health, safety, and well-being of our entire community and part of that commitment is providing unique virtual opportunities to help students remain connected from afar,” said Heath Price, Associate CIO at University of Kentucky. “We can’t wait to see all the action this year and are excited to connect with our students, our community and everyone in Big Blue Nation.”

The Round of 64 and 32 on April 9, Round of 16 and Round of 8 on April 10 and the Round of Four and Championship on April 11 and the final “boss battle” with Immanuel Quickley on April 19. All games will begin at 5 pm ET. Fans are encouraged to use #HoopsatHome, #BetterTogetherUKY, #UKxGenG, #HoopsatHome and #NBA2K_UK on their social media channels to connect.

Gen.G and the University of Kentucky continue to bring best-in-class esports activations to the community and remain committed to building the next generation of esports leaders around the country. The two have partnered together since 2019 bringing together engaging virtual events, activations, and initiatives over the last two years including the UK Esports Invitational on March 12-14 which featured 10 athletic rivals competing in League of Legends, VALORANT and Rocket League, as well as the “Give Health for Kentucky Kids” charity program.

About Gen.G
Established in 2017, Gen.G is the leading esports organization connecting the United States and Asia. Ranked no. 6 in the Forbes list of the “World’s Most Valuable Esports Companies,” Gen.G is the only major organization that owns and operates top teams in the world’s leading esports markets — China, South Korea and the United States. Its unique portfolio of teams, winners of seven global championships to date, includes the Seoul Dynasty franchise of the Overwatch League; 2014 and 2017 League of Legends world champion team in South Korea; the world’s top all-female Fortnite team, based in Los Angeles; and the NBA 2K League’s historic expansion franchise in Shanghai.

United under #TigerNation, Gen.G’s core mission is to help fans and athletes use the power of gaming and esports to get ahead in and beyond the competition. The company has quickly become a commercial and thought leader, building a global, inclusive and cross-cultural future for sports entertainment. Its widely acclaimed initiatives include: #TeamBumble, the leading team platform for the empowerment of women in gaming; and Gen.G Elite Esports Academy, the world’s first fully-integrated academic esports program. Gen.G’s teams, content creators and corporate staff work out of their offices in Los Angeles, Seoul and Shanghai. More information about Gen.G esports and its teams can be found at this link.

About the University of Kentucky
The University of Kentucky is increasingly the first choice for students, faculty and staff to pursue their passions and their professional goals. In the last two years, Forbes has named UK among the best employers for diversity, and INSIGHT into Diversity recognized us as a Diversity Champion four years running. UK is ranked among the top 30 campuses in the nation for LGBTQ* inclusion and safety. UK has been judged a “Great College to Work for” three years in a row, and UK is among only 22 universities in the country on Forbes’ list of “America’s Best Employers.” We are ranked among the top 10 percent of public institutions for research expenditures — a tangible symbol of our breadth and depth as a university focused on discovery that changes lives and communities. And our patients know and appreciate the fact that UK HealthCare has been named the state’s top hospital for five straight years. Accolades and honors are great. But they are more important for what they represent: the idea that creating a community of belonging and commitment to excellence is how we honor our mission to be not simply the University of Kentucky, but the University for Kentucky.