For much of the time before modern human history, the center of people’s light and life was the humble campfire.  It was a place to teach, share, connect, and give thanks.  It was the hub of culture, where our ancestors gathered nightly to fight back the dark with their myths, stories, and the joy of their voices raised in song.

Stories and songs.  These basic units of shared culture remain with us, even as our source of flickering light has changed.

In 2009, The Onion famously lampooned that we spent 90% of our waking hours staring at glowing rectangles.  They weren’t wrong, but those “gleaming quadrangles”, as they described, weren’t ever merely about the light they generated, rather, they’ve always been about connections and the meaning they carried.

In times like these, when so many of us can feel like little islands, connecting with other people to share stories and songs takes on a special significance.

So it’s not surprising that many social networks and streaming services are reporting global spikes in member activity.

For example, on the “stories” side, nearly 16 million new people joined Netflix during the first part of the year, which was twice as many as they’d expected.  Other streaming services have seen rises as well, including Disney+.  And underscoring the many benefits of engaging in these libraries of ‘once-upon-a-times’, watching streaming video has quickly become the #1 leisure activity for people at home.

On the “songs” side, social singing network Smule has also seen a significant rise in new users joining in from all over the world since people began staying home. Smule is a global online community of music lovers where millions of people from all over come together each day to sing along with millions of popular songs, often with other people – and sometimes with the stars themselves- plus make new friends, cheer each other on, and simply have fun. Regardless of skill level, the thing all Smule members have in common is a love for singing, and a love for connecting with other people through the shared experience of performing songs together.

Playing with the Smule app lies somewhere between SnapChat and YouTube, mashed up with an automated sound and video recording and effects studio.  People can sing or record songs on video with new friends, karaoke by themselves, or acapella with others.  Members of Smule communities include people from all walks of life, including real-life superstars, such as Lewis Capaldi, who upload recorded versions of their top hits for other members to sing along with and repost to the network and other social media platforms. Fans can even sing along with Disney characters like Moana to the hits from popular Disney films.

Thousands of independent singing communities and teams have sprung up around the world, using Smule as the platform to showcase their singalongs.

One such community, Apex Team, is a group of 46 young, talented and dynamic voices from all parts of the world who came together as a virtual choir that inspires online audiences with their enjoyable musical performances. Apex produces more than a hundred group collaborations a year, and most recently, a phenomenal performance of Fight Song, by Rachel Platten and Dave Bassett – edited into a “Thank You” to front line professionals in the fight against COVID-19.

Back to the historical notion of giving thanks.

So, what are the lessons in all this?  What’s the advice from our modern storytellers and singers?  And what was the message from our ancestors?  Is it that we’re not so different from them, or each other, after all?  That we’re still people?  Still communities?  Or is it that we might want to sing a little more?  That we need to reach out to those around us – even if the definition of “around” might now include the other side of the world?  Or that it’s important to let others know how important they are to us?  The answers are probably as varied as people, and the communities they create.

Over untold millennia, some things have changed.  For the average person, it used to be that there was only one light they could gather around; now, there are billions.  And they’re made of us.

Meanwhile, other things remain the same.  Shared light is better together, stories and songs still matter, and the darkness and silence never last. 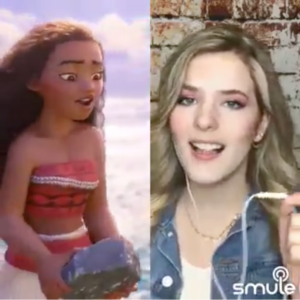 Smule.com members can sing with some of their favorite Disney characters.