National competition inspires students to realize their potential in science and technology fields.

WASHINGTON — April 26, 2010 — Over the past three days, students across the country came together in Washington, D.C., to celebrate their creativity and passion for solving the world’s toughest problems using technology. These students were part of the eighth annual U.S. Imagine Cup, the world’s premier student technology competition sponsored by Microsoft Corp.

“Imagine Cup is more than a software competition; it’s about inspiring students to become tomorrow’s technology and business leaders,” said Craig Mundie, chief research and strategy officer at Microsoft. “The technology industry not only is a key driver of economic growth and job creation, but also offers vast potential to solve some of the world’s toughest societal problems. The creativity and passion of these students speaks volumes about the impact they will have on the world.”

More than 22,000 students registered for this year’s U.S. competition; only 80 were selected by a panel of judges to compete in the U.S. finals. The participants were tasked to use technology to make a difference in the lives of people in their local communities and around the world, addressing issues in education, healthcare and environmental sustainability. Projects ranged from a mobile safety alert system for women to a social-networking application that connects entrepreneurs to investors in the micro-banking industry.

“Studying computer science doesn’t necessarily mean that you’ll work for a computer company, but it does mean that you’ll have the education, resources and understanding to basically do anything in a future career,” said John R. White, executive director and CEO of Association for Computer Machinery. “It’s a fundamental skill and knowledge set for the 21st century.”

Team Mobilife from the University of California, Davis, took home the grand prize in the software design category. The team’s project helps field doctors use mobile technology for early detection of some vascular diseases among children in developing regions. Although these disorders are normally easy to diagnose in modern hospitals, the lack of tools readily available to doctors who work in places like sub-Saharan Africa, Southern Asia and Oceania make new solutions necessary.

The team will travel to Warsaw, Poland, in July to represent the United States in the worldwide finals and showcase their innovation alongside hundreds of other student teams from around the world. In addition to cash and prizes awarded to the top teams in the competition, students gain real-life experience, make new friends and attend several training sessions to help them turn their ideas into reality.

2010 U.S. Imagine Cup Winners
Software Design
The Software Design invitational is Imagine Cup’s largest competition. The winner of the U.S. competition is the only team that will receive an automatic bid to compete at the worldwide finals in Poland among students from over 100 countries and regions. Students create real-world software and services applications that use Microsoft tools and technology.

Game Design
The Game Design competition is a chance for students to create their own video game and at the same time help change the global community. Students are asked to create a new game that has been developed either using Microsoft XNA Game Studio 3.0 or later, Microsoft Visual Studio, or Microsoft Silverlight technologies.

Achievement Awards
The Achievement Awards represent additional opportunities for students to be recognized for their excellence and creativity. The four awards highlight teams that had public appeal through an open voting process, the best solution accessed through a mobile phone, the top project that utilizes cloud computing, and a Web design competition.

The Imagine Cup is a worldwide student competition that helps young people apply their imagination, passion and creativity to make a difference in the world through technology. The event is one of the largest annual investments that Microsoft makes to inspire students.

More information about the Imagine Cup is available at http://www.imaginecup.com and the official Imagine Cup blog.

Founded in 1975, Microsoft (Nasdaq “MSFT”) is the worldwide leader in software, services and solutions that help people and businesses realize their full potential.

Note to editors: For more information, news and perspectives from Microsoft, please visit the Microsoft News Center at http://www.microsoft.com/news. Web links, telephone numbers and titles were correct at time of publication, but may have changed. For additional assistance, journalists and analysts may contact Microsoft’s Rapid Response Team or other appropriate contacts listed at http://www.microsoft.com/news/contactpr.mspx 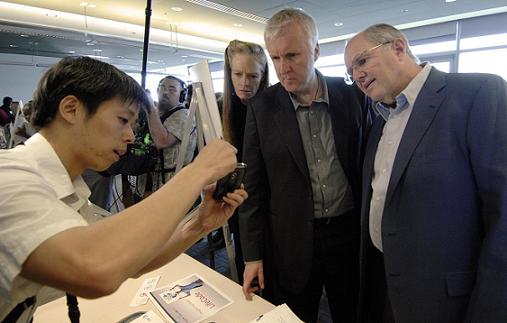 Photo caption: 04/26/10 Hun Wang of team LifeCode from Wayne State University demonstrates his team’s product to director James Cameron his wife Suzy and Microsoft’s Chief Research and Strategy Officer, Craig Mundie at the 2010 Imagine Cup competition held in the Newseum in Washington, D.C. on Monday.  Click here to download a high-resolution version of this photo

One thought on “Students From U. California-Davis Win Microsoft’s US Imagine Cup”