“‘Epic historical military fantasy’ sounds like a whole lot of book—in a good way. When Rin tests into the most elite military school in her country, it’s good and bad: her classmates are horrible, but she discovers an unexpected power. Though it’s not a YA book, The Poppy War’s cover copy reminds me of both Eon and An Ember in the Ashes: magical powers, intense school, and harrowing conflict. Yes, please.” 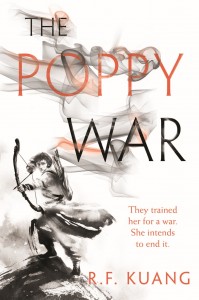 Georgetown student R.F. Kuang makes her literary debut
with a brilliantly imaginative novel inspired by the history of China’s modern history.
The novel is imbued with treachery and magic, much in the tradition of
Ken Liu’s The Grace of Kings and N.K. Jemisin’s The Inheritance Trilogy.

When Georgetown University student R.F. Kuang was inspired by her undergraduate studies in Chinese history to write a fantastical reimagining of China’s insurgent modern history, she never imagined that her finished manuscript, the first in a projected three-part trilogy, would go into heated auction amongst America’s top science fiction publishers.  And when Harper Voyager, an imprint of HarperCollins publishers, acquired her work on Kuang’s 20th birthday, there was certainly ample reason to celebrate.  THE POPPY WAR, which will be released in hardcover format on May 1, 2018 (just a few days before the author’s graduation ceremony), is one of the imprint’s most anticipated releases of the year.  “We’re incredibly excited to publish THE POPPY WAR, and to be working with R.F. Kuang, who is an incredible new talent in the speculative fiction industry,” says Voyager editorial director David Pomerico.  “Set in a world full of magic, but based on Chinese history, the blending of military fantasy and coming-of-age narrative hits all the notes popular in the genre today.  Kuang combines cultural authenticity with personal creativity at a time when both qualities are very much demanded by readers.”

The author, a student of geopolitics, notes in a recent interview with The Hoya newspaper, “(THE POPPY WAR) is about the domestic politics, military strategy and interpersonal dynamics of the most important figures of 20th century China, but everything is transposed to a Song dynasty setting…I’m interested in military history and collective memory. That is, how wars are fought, and how we remember them.”

Kuang continues to work on the second and third book in the series, and plans to finish writing the trilogy this summer, before she moves to the United Kingdom for her graduate program at Cambridge University.

About the Book:
Rin knows that the only way out of her village–and an arranged marriage she doesn’t want–is to test into the elite military academy at Sinegard. When Rin aces the Keju—the Empire-wide test to find the most talented youth to learn at the Academies—it is a shock to everyone: to the test officials, who couldn’t believe a war orphan from Rooster Province could pass without cheating; to Rin’s guardians, who had believed they’d finally be able to marry her off and further their criminal enterprise; and to Rin herself, in realizing she is finally free of the servitude and despair that had made up her daily existence.

The first thing Rin learns upon arriving at academy is that being a dark-skinned peasant girl from the south is not an easy thing at Sinegard. Targeted from the outset by rival classmates for her color, poverty, and gender, Rin discovers she possesses a lethal, unearthly power—an aptitude for the nearly-mythical art of shamanism. Exploring the depths of her gift with the help of a seemingly insane teacher and psychoactive substances, Rin learns that gods long thought dead are very much alive—and that mastering control over those powers could mean more than just surviving school.

For while the Nikara Empire is at peace, the Federation of Mugen still lurks across a narrow sea. The militarily advanced Federation occupied Nikan for decades after the First Poppy War, and only barely lost the continent in the Second. And while most of the people are complacent to go about their lives, a few are aware that a Third Poppy War is just a spark away . . .

Rin’s shamanic powers may be the only way to save her people. But as she finds out more about the god that has chosen her, the vengeful Phoenix, she fears that winning the war may cost her humanity . . . and that it may already be too late.

R. F. Kuang is a graduate of the 2016 Odyssey Writing Workshop. She studies Chinese history at Georgetown University, and has recently been awarded a Marshall Scholarship.  Kuang will continue her studies of the legacy of warfare in China at Cambridge University in the fall.   The Poppy War is her debut novel.