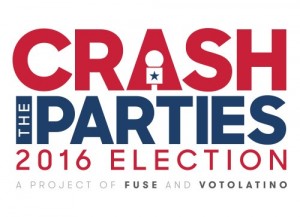 Fuse (www.Fuse.tv), a national television network for the fast-growing Latino and multicultural 18-34 audience, and Voto Latino, the leading nonprofit organization empowering American Latino millennials by engaging them through civic media, today announced the official launch of Crash the Parties, a partnership created to inspire and encourage Latino participation in the upcoming Presidential election.

The Crash the Parties initiative is a nationwide search to identify two aspiring millennial reporters to cover the Democratic and Republican National Conventions for Fuse. Beginning today, those interested in being considered can apply either online at crashtheparties16.com or at live events taking place at college campuses across the nation, the first of which was held at the University of Southern California on March 30. For more location updates, please visit crashtheparties16.com. Submissions are being accepted through May 15.

Once identified, the winners will receive media training and serve as Fuse reporters from the Democratic and Republican convention floors – appearing on television and online – offering an authentic perspective on the candidates, the election and issues at the forefront.

About Fuse
Fuse (www.fuse.tv) is a national television network reflecting the wide-ranging tastes and attitudes of the fast-growing, multicultural and Latino 18-34 audience. The network relaunched September 30, 2015, expanding beyond music with original entertainment programming. Fuse is currently available in approximately 70 million households, and reaches consumers across multiple other platforms, from video on demand to online, mobile, social media and live events.

About Voto Latino
Voto Latino is a pioneering civic media organization that seeks to transform America by recognizing Latinos’ innate leadership. Through innovative digital campaigns, pop culture, and grassroots voices, we provide culturally relevant programs that engage, educate and empower Latinos to be agents of change. Together, we aim to build a stronger and more inclusive democracy. To learn more about Voto Latino, visit www.VotoLatino.org. Also engage Voto Latino on Facebook, on Twitter, and on Instagram.