11 college students from around the country selected; scholarship set to provide opportunities to next generation of gaming leaders

Limited-edition shirt featuring art from Heron Preston to celebrate the recipients goes on sale today at 5PM PT, net proceeds to go into next year’s Foundation

LOS ANGELES (Dec. 17, 2020) – Global esports organization, Gen.G, today announced the first class of recipients for its Gen.G Foundation scholarship. 11 college students from around the country were chosen to receive the scholarship which focuses on supporting women, people of color, and low income students enrolled in a US university or college who are interested in gaming, esports, entrepreneurship, journalism or content creation. Each will receive $10,000 to subsidize their tuition for this academic year, and will be a part of Gen.G’s ongoing programming in 2021 for mentorship and career development.

The recipients (with hometowns) include:

“The first-ever Gen.G Foundation class is a very special group; they will be change agents in the gaming world in the years to come,” said Gina Chung Lee, VP of Brand at Gen.G. “The best part of this process was getting to know these students and hearing their stories. We will continue to prioritize building out a diverse and supportive network of people who are passionate about careers in gaming and digital media. More to come in 2021!”

Each of the winners will receive a limited-edition shirt featuring artwork designed by Heron Preston, who serves as Gen.G’s Executive Brand Advisor. Fans can pre-order the t-shirt for $65 today at geng.gg, with net proceeds going into the 2021 Gen.G Foundation Fund.

Earlier this year, Gen.G announced a $1 million commitment to developing the next generation of leaders in the gaming industry, pledging to commit $100,000 annually for 10 years through the establishment of the Gen.G Foundation alongside its partners – Silicon Valley Bank, University of Kentucky, Eastern Michigan University, and Bumble. 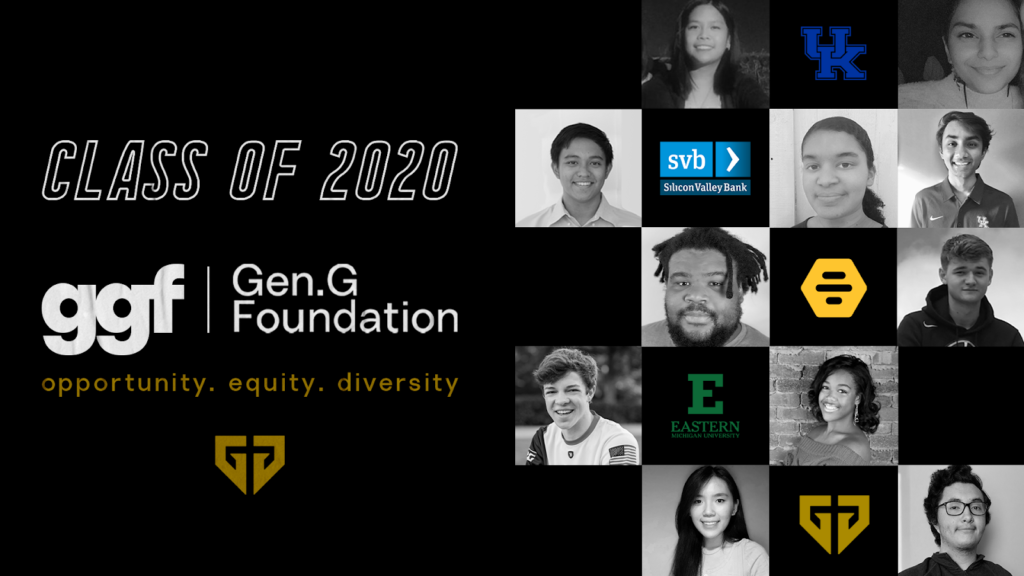 About Gen.G
Established in 2017, Gen.G is the only major organization that owns and operates top teams in China, South Korea and the United States. Ranked no. 6 in the inaugural Forbes list of the “World’s Most Valuable Esports Companies,” Gen.G’s core mission is to help fans and athletes use the power of gaming and esports to get ahead in and beyond the competition. The company has quickly become a commercial and thought leader, building a global, inclusive and cross-cultural future for sports entertainment.

United under #TigerNation, Gen.G boasts seven global championships to date among their competitive teams which includes the Seoul Dynasty franchise of the Overwatch League, the LCK world champion team in South Korea, the world’s top all-female Fortnite team, PUBG, CS:GO, Valorant and the NBA 2K League’s historic expansion franchise in Shanghai.  Its widely acclaimed initiatives include #TeamBumble, the leading team platform for the empowerment of women in gaming, and the Gen.G Global Academy, the world’s first fully-integrated academic esports program in Seoul. More information about Gen.G esports and its teams can be found at this link.